Listed are several terms you will likely hear or read about as you enjoy your California Wine tasting adventure. Becoming familiar with these terms will help you in explaining what your nose and your taste buds are telling you about the wine you are tasting. 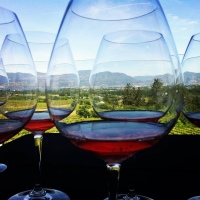 Listed below are several terms you will likely hear or read about as you enjoy your California Wine tasting adventure.

acidity - the liveliness and crispness noted in wine.

aeration - the deliberate addition of oxygen to wine to round out and soften a wine.

aging  - holding wine in barrels, tanks, and bottles to advance them to a more desirable state.

alcohol  - ethanol (ethyl alcohol), the product of fermentation of sugars by yeast.

aroma  - the scent of the grape, as well as the smell of wine, especially young wines. (different than "bouquet")

balance - when the elements of wine - acids, sugars, tannins, alcohol - come together in a harmonious way, it is said to be "balanced".

body  - a sensation and a term describing the weight and fullness of wine in the mouth.  A wine can be light, medium, or full bodied.

bouquet  - a term that refers to the complex aromas in ages wines.

breath/breathing  - allowing wine to come in contact with air to open and improve the flavors.  (see "aeration")

closed  - term describing underdeveloped and young wines whose flavors are not exhibiting well.

dry  - opposite of sweet.  A taste sensation often attributed to tannins and causing puckering sensations in the mouth.

earthy  - an odor or flavor reminiscent of damp soil, a forest floor scent or smell.

finish -  The impression of textures and flavors lingering in the mouth after a wine is swallowed.

flavors -  Odors perceived in the mouth.

fruity  - a tasting term signifying wines that exhibit strong smells and flavors of fresh fruit.  Can also describe aromas of cooked fruit, as in "jammy".

full-bodied  - a wine high in alcohol and flavors, often described as "big".

length - how long the flavors of a wine persist in the mouth after swallowed; a lingering aftertaste.

long - denotes the length of time a wine's presence stays in the mouth after swallowling.

nose - how a wine smells.  A tasting term describing the aromas and bouquets of a wine.

oxidation - wine exposed to air that has undergone a chemical change.  The deteriorating wine will exhibit stale smells and colors can look brown.

spicy - a tasting term used to note odors and flavors reminiscent of various aromatic spices that are found in certain wines.

tannins - the phenolic compounds in wines that leave a bitter, dry, puckery feeling in the mouth.

texture - a tasting term describing how the wine being tasted feels on the palate.  "Texture" is used more often when describing heavy, dense wines with a big mouthfeel.

vegetal - tasting term describing characteristics of fresh or cooked vegetables detected on the nose and in the flavors of the wine.  Bell peppers, grass, and asparagus are common "vegetal" descriptors.

weight - similar to "body", the thicker or richer a wine feels in the mouth, the more weight is described as having.

young - an immature wine that is usually bottled and sold within a year of its vintage.  Wines meant to be drunk "young" are noted for their fresh and crisp flavors.

END_OF_DOCUMENT_TOKEN_TO_BE_REPLACED

Wine Wednesday takes a look at FӒSI - 2013 Malbec Reserva FӒSI Winery in Madera County is putting out some great wines. While known for their Syrah this little gem comes from their vineyards in Argentina.