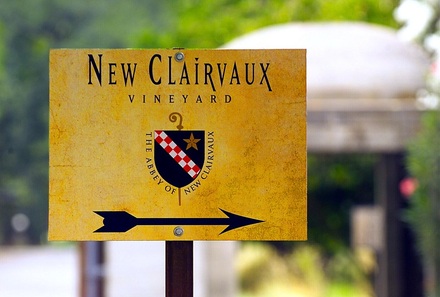 In a tiny Northern California town called Vina, there's a winery that's definitely stands alone, a little off the beaten track. That likely because this area Tehama County is better known for olive groves and cattle ranches than grapes. Having been urged by more than one wine maker in the Shasta Cascade and in Tehama county to try New Clairvaux’s wines I recently made it a point to stop in on my way home from visiting my family in the Redding area.  It was an interesting little detour jumping off Interstate 5 and over to Highway 99.  I had not been on this part of 99 for some years.  It was nice to drive past the orchards and ranches.  I was looking forward to tasting the wines produced under the watchful eye of Aimee Sunseri who is the winemaker at New Clairvaux.

New Clarivaux and the land it sits on is part of some very interesting history.  In 1843, pioneer Peter Lassen was award a 22,000 acre Mexican land grant called El Rancho del Bosquejo.  Lassen planted a one-acre mission grape vineyard and began making wine.  In 1853, Lassen’s ranch fell into the hands of entrepreneur and winemaker Henry Gerke, who expanded the small vineyard to nearly 100 acres.  His wines were shipped world-wide.

Railroad magnate and later governor, Leland Stanford bought the land in 1881 and expanded it to 0ver 55,000 acres.  He began construction of the Great Vina Ranch. Stanford brought in enology and viticulture consultants from France to create his wine empire and eventually planted roughly 4000 acres of grapes, making this the largest winery and vineyard in the world in 1889.  Alas, grapes from northern France cannot thrive in temperatures that can hit 115 degrees and Stanford never achieved his goal of mastery of the wine world.  This just goes to prove that no amount of money and expertise can help you produce good wine from the wrong grapes planted in the wrong terroir.  To realize any financial success he had to result to making brandy instead and the row of beautiful brick Brandy sheds that are still standing were built.  After Leland’s death, and prior to the onset of prohibition, the winery ceased operation and the estate fell into disarray, finally being split up and sold off in pieces by the Trustees of Stanford University.  It was in 1955 that the Trappist Cistercian Monks purchased the winemaking facility and surround land of approximately 600 acres.  This historic land now serves as a place of prayer, work and home to the monks of the Abbey of New Clairvaux.

The area has some very hot days, without the cool nights that other California AVA’s enjoy.  In the late 1800’s the railroad baron and one-time California governor created the Great Vina Ranch here, planting 4,000 acres. It was the world's largest vineyard at the time. He did pretty well with brandy, but not with wine.  Given the fact that it gets unrelentingly hot in Vina, without the cool nights of other California wine regions. Then there's the soil: deep, moist, and sandy. That seems great to the outsider, but wine grapes do best in rocky soil, where the vines have to work harder to grow.  Why would a winemaker like Aimee Sunseri want to become business partners with the monks of New Clarivaux?  While I have not yet had the opportunity to meet Aimee Sunseri as of yet, word has it she likes the challenge.  Aimee comes from a family with deep roots in winemaking and the family has made wine in Napa and other parts of California for five generations.  In fact, it was Anton Nichelini, a Swiss immigrant was making history  of his own in the foothills of Napa Valley.  In 1890, he transformed his modest 160 acre homestead into the Nichelini Family Winery.  The Nichelini winemaking legacy continues today - his winery is Napa’s oldest family-owned wine operation.

It was in the year 2000 that Anton’s grandson, Phil Sunseri, and the monks of New Clairvaux Abbey started planting two experimental vineyards.  They planted what is known as the St. James Block in the loamy soil you see as you drive into the Abbey.  A rocky piece of land a few miles away was named the Poor Souls block.  It was in these vineyards that Aimee’s passion for viticulture grew.  Aimee is the fifth-generation of California grape growers and winemakers.  In 2009 she began as her family’s winemaker at Nichelini Family Winery.

Based on our visit and the tasting experience it is beyond safe to say that Aimee’s approach to winemaking is to show the nature of the terror and the grapes planted.  The wines exhibited themselves delightfully.

I found that the 2013 Pinot Grigio expressed itself wonderfully, and it is not my favorite grape.

Still, I was pleased  with the wine and purchased some to share with friends and enjoy later.

Petite Temptation is a 50:50 blend of  Petite Sirah from New Clairvaux Poor Souls Block and their St. James Block  Tempranillo.  The Tempranillo  expresses itself with wonderful fruit flavors and the Petite Sirah provides dark rich  colors and  enough tannins to  provide some backbone, yet not overly done - a nice balance.

I look forward to  another visit and hope to be able to speak with Aimee Sunseri and tour the barrel room.  I must say though that  the folks in the tasting room were helpful, friendly and informative.  I have hear very Good things about New Clairvaux’s Barbara but alas it was not available for tasting on the day of our visit.  Neither was the 2010 Syrah Reserve from the St. James Block available for tasting, but I did bring a bottle of that home to try later.  Might even open it with some friends.

Is it worth stopping in?  Yes!  The drive past walnut orchards, ranches and farms is great.  Wonderful relaxing drive along Tehama’s     .  Just a short drive off the “99” and through the sleepy little community of Vina to New Clairvaux and some delightful wine tasting.

Directions: As you exit Highway 99 at the Vina exit follow the signs directing you to the winery.  Watch for the signs as New Clairvaux is no pretentious and it is not that hard to miss the entrance.  That being said; when the road takes a sharp left, continue straight on to a small road until you see the sign for New Clairvaux.  As you drive rounded a blind turn in the narrow road the brush on the sides opened up to reveal a picturesque pond surrounded by cattails and water iris.  As you passed through the gates to the meticulously maintained grounds it was obvious that whoever cares for this land has a deep love of this place. As drive further you will pass the brick winery building and turned right to the tasting room, located at the far north end of the building.

END_OF_DOCUMENT_TOKEN_TO_BE_REPLACED

Each year, tourists visit wine regions throughout California to explore the state's more than 3,000 wineries and the diverse array of cultural attractions. From gardens, art museums, great seasonal cuisine and artisan foods to natural hot springs, spa treatments, beaches, redwood groves, golf, and boutique shopping. California Wine Trails offers travelers many diversions between visiting the wineries and enjoying the wines you will find along the way.