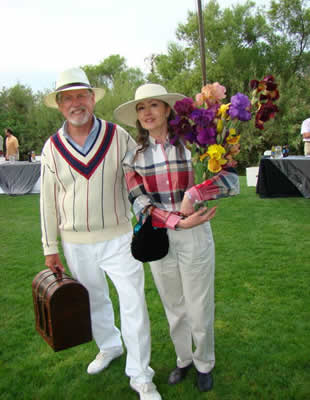 Westbrook Wine Farm  - Vineyard and Winery was conceived and created by Tammy Krause and California wine industry veteran, Ray Krause in 1995. After a ten year search for the heat summations, elevation, orientation, air drainage, soils, hydrology and market proximity,  the O’Neals location at 1500 feet in elevation near Bass Lake and the southern entrance to Yosemite National Park was selected. Their selection and search has rewarded them well as the vineyard has proven appropriate for growing the seven of the eight approved red Bordeaux varieties, Cabernet Sauvignon, Cabernet Franc, Merlot, Malbec, Petit Verdot and Carmenere. The 40 acre site was a challenge but the Krause's cleared the site for the vineyard and waterways were protected in cooperation with the USDA /NRCS fire fuel reduction and wildlife protection program.

Ray and Tammy Krause’s Fait Accompli vineyard site prep included disturbing the soil to only 18” which facilitates their no-till farming the top 3’ of soil with raking and mowing only. Row widths are 8’.  Vines were close planted in 1997 at 3.5’ to make better use of land and water.  Rootstocks are drought resistant, 110R and 1103P. Row orientation was the result of pounding stakes and measuring shadows during the annual ripening (cell enlargement/veraison) period.

Training is to vertical shoot with eight permanent wires per row.  All irrigation is gravity flow to pressure compensating drip with individual row control. Through the drip and foliar nutrients are all certified organic. Only 5 of the 40 acres are “domesticated” leaving 35 acres to carbon offset/grazing and wildlife habitat. The winery is earth bermed with portions as much as 15’ underground. Building orientation is such that no direct sun hits doors or windows.

Westbrook Wine Farm vineyard and winery is situated in O’Neals, California, in the Sierra Nevada Foothills of eastern Madera County, California, near Bass Lake and Yosemite National Park. This mountain vineyards is planted to field blends of Cabernet Sauvignon, Cabernet Franc, Malbec, Merlot, Petit Verdot, Gros Verdot and Carmenere.  Westbrook is a winery that practices sustainable farming and minimalist winemaking. They make their wine in the traditional Claret style by co-fermenting grapes, rather than by making separate varietal wines and blending them. Thier Fait Accompli includes six and their Museum wines, three of the eight red varieties permitted for use in Bordeaux or Meritage style wines. – You have just got to try their Fait Accompli – worth every penny!

Wine Tasting – Fait Accompli 2004 – Westbrook Wine Farm
What does fait accompli mean?
In French, fait is a conjugated form of the verb faire, which means to do, but it also means fact, which is the applicable context in this phrase. Fait accompli literally translates into fact accomplished. In English, fait accompli means a course of events that has already been completed and cannot be undone.
 Another meaning became clear once again last night when my wife and I opened a bottle of Fait Accompli “2004” Evolution from Westbrook Wine. What a delight to the nose and palate.  While not the first time I have enjoyed Fait Accompli – it had been awhile since I had pulled a cork from a Westbrook bottle.

Trelio Food & Wine by Chris Shackelford posted some interesting comments a few years back on a significant taste test where Westbrook Wine Farms “Fait Accompli” really strutted its stuff in a number of tasting rounds.  In part the post reads :
Westbrook, Fait Accompli 2001 vs. Lynch Bages 2001
Fait wins 16 to 8
Another wine I thought the Fait Accompli would fail to keep up with.  Even though this is not one of the greatest Lynch Bages vintages, I still never thought that a solid Lynch Bages would show so poorly against the Fait.  Clearly the Fait was a much more solid wine and will easily out live any Bordeaux from the 2001 vintage.
Westbrook, Fait Accompli 2002 vs. Leoville Barton 2002
Fait wins 16 to 8
This is understandable considering the Leoville Barton rewards with patience in the cellar, not immediately out of the bottle in any way.  The aromatics of these two wines were rather close and both showed well, but the Fait had the fruit advantage on this round.  I think if these two would be tasted wide by side in ten years, this would be a much different fight.
Westbrook, Fait Accompli 2003 vs. Pontet Canet 2003
Fait wins 12 to 11/ one Tied
I picked the 2003 Pontet Canet for this round as I remembered it as a more approachable wine upon release with very significant fruit quality.  This was a very tight competition as the wines were structurally, and in many fruit characteristics, very similar.  This was a very even match and could have gone either way.
Westbrook, Fait Accompli 2004 vs. Petite Bocq 2005
Fait wins 17 to 7
To mix things up a little, due to knowing that the 2004 Bordeaux vintage would not really have a chance at showing at this point (and I don’t own any 2004), I substituted a decent unclassified from the 2005, that has more modern wine-making practices.  Overall the Petite Bocq was very out classed in this round and a mistake for me to even put in.

Westbrook, Fait Accompli 2005 vs. Chateau Pipeau 2005
Tied Round 12 to 12
Overall I think this round was different game.  I wanted to throw in a wine that was a totally different blend and a wine I knew would drink young and ready.  For me this was a tie as well as both wines were a little closed and entirely too young to be consumed at this point.

While I have not had the opportunity to taste Ray Krause's 2002 Fait Accompli I have enjoyed a number of his vintages.  In fact, I still have one more 2004 laying down waiting to be open and enjoyed along with some "05" and "08".  At a recent dinner and the bottle of Fait Accompli "04" was certainly no disappointment.  Wonderful nose and the flavors just seem to surround your mouth with velvety-smooth pleasure. So glad I have one more laying down, wish I had a few more.  Such a great wine from Madera’s wine trail?  Oh, yes!  I am going to Westbrook Wine Farm as soon as I can to pick-up a few more of this wineries gems.  If you plan on going yourself, be sure to call for an appointment to taste so of Ray and Tammy's wonderful wines.

There area a lot of wines produced in California, and there are so many very good ones.  If you enjoy a good Bordeaux’s, you owe it to yourself to try Fait Accompli.  Not French, but certainly one of the premier wines of the Golden State.

“FAIT ACCOMPLI” 2004 “Evolution” Estate Grown, Madera County. Perhaps their most harmonious and well integrated rendition of Westbrook’s flagship wines to date.  However, the 2007 & 2008 at a recent dinner with friends were excellent.

END_OF_DOCUMENT_TOKEN_TO_BE_REPLACED

How to know the perfect drinking point of a wine? APPEARANCE (how does it look in the glass)